The town’s first library was known as the Oxford “Circulating Library”. St. Peter’s Episcopal Church, under the leadership of Rev. S. R. Bailey, instituted the idea in December of 1883. A year later, the library was established by the St. Peter’s Women’s Guild.Not long after, Mr. W. W. Hughes became the town’s voluntary librarian and maintained 700 books at his Oxford Valley farmhouse (located on the west side of Little River just north of Lounsbury Road and facing the Town Green). The popular library soon gained a supportive membership of 150 people.Mr. Hughes’s home also became the headquarters for literary, musical and other entertainments. The Oxford Valley farmhouse gradually evolved into a virtual town cultural center. Records indicate that Mr. Hughes ran the library until at least 1892.There are no records of library activity between Mr. Hughes death in 1904 and 1926 except for a 1925 School Supervisor report that “the public library greatly benefited the schools.” A total of 1,119 books were read from an approved list, and Library Reading Certificates were awarded to all who read five books or more.In 1926, a library association was formed with Mr. Hubert E. Stoddard as the first and only president. The town appropriated $100 to the town library that was then located in the Congregational parish house. There were 200 very old books preserved in the library, and Mrs. Eames, the Librarian, was paid $50 per year. The library remained in the parish house until 1933.

Soon after, the Town Hall on the Green at Governor’s Hill Road was erected(the current police station), and the town set aside a room for the library. The library remained as a private membership organization until 1951, when it was turned over to the town and a six panel Library Board of Directors was appointed.

By 1952, it was felt that larger quarters would be needed, and a vote at a town meeting assigned the library to the north room of the Center Fire House. The town voted for the library renovation and 1,100 books were added. The library was opened as frequently as funds permitted, with board members volunteering their time one night a week and school children filling in during the day.In Feb 1958, “The Friends of the Library” was established. The Friends helped with story hours, lectures, and exhibits, maintaining the library’s role as both a cultural center and a book library. In 1960 the library contained about 6,000 books.

The library was “temporarily” moved to the basement of town hall in 1978, with the First Selectman promising a library building within five years. Library collections and services expanded, and a Children’s Librarian position was added in 1986.Several planning and building committees were developed during this period, but all efforts to build a library building were defeated. With a grant from the state’s “This Old Library” program in 1995, the library was renovated to make the best use of all its available space. Two years later the library initiated an automated catalog system. In 1999 a combined Library and Senior Center building was planned for a selected site on Governor’s Hill Road. The Library Board sold bricks and held a polka fest to raise funds (the bricks purchased now line the town hall patio in front of the old library). The Friends of the Library in Oxford set aside all of the funds from their yearly holiday raffle into a Friend’s building fund savings account. They also used money derived from book sales and other activities to fund library programs, passes to museums and state attractions, and other special needs. During its formation a nonprofit Library Foundation held car shows and raffled off a vintage car to raise a sizeable amount of money for the proposed new building. A Connecticut State Library grant for $500,000 was also awarded the town, but had to be returned when the new library resolution was defeated at referendum by 47 votes.

In 2004 a grant was received from the Katherine Matthies Foundation to enable the Library to join Bibliomation, a consortium of over 65 public libraries that provides for the technological and automation needs of its member libraries. Volunteers helped convert materials, barcodes, and patron records into the new catalog system to enhance operational efficiency and automation compatibility.

In June 2011 Bibliomation switched circulation systems from Horizon through SirsiDynix to an open source software system called Evergreen. This system enables our patrons to do more searching and activities from home, while allowing the staff more control over what capabilities we want in our system.

In November 2015 the Town voted 2344 yes, 811 no at referendum to build a new library building on 49 Great Oak Road for $3.5 million. Architects Michael Tribe and Patricia Montero of Peter Gisolfi Associates worked with the Library Building Committee, chaired by George Mitchell, to plan and build our new space, which opened to the public on National Book Lover’s Day, August 9, 2018. 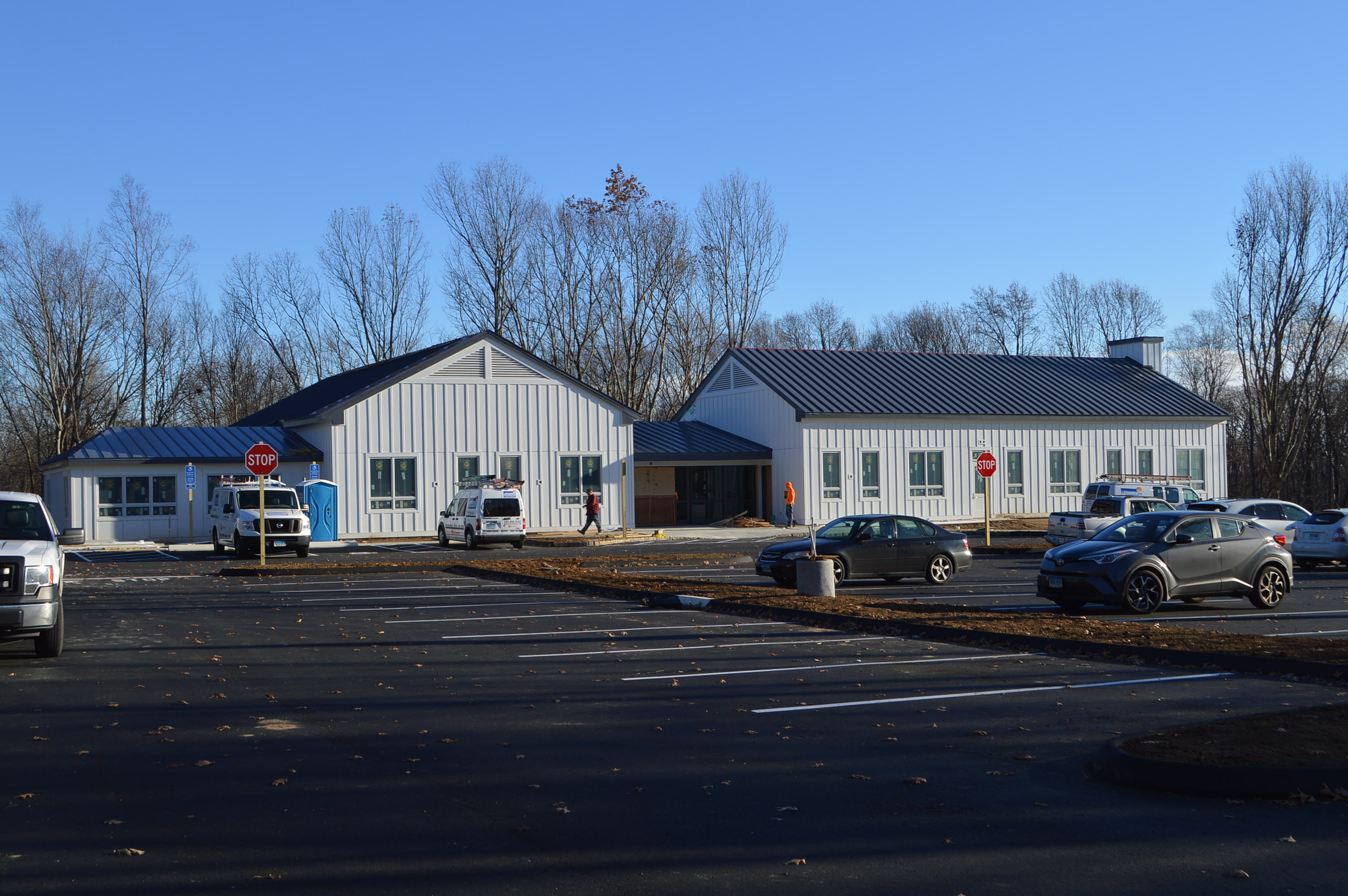 Our hours for public entry are:

Wednesday: 9am to 4pm

Thursday: 9am to 7pm

Saturday: 9am to 4pm

Our outdoor book drop is open 24/7 for patrons to return materials. No materials may be returned inside the library.